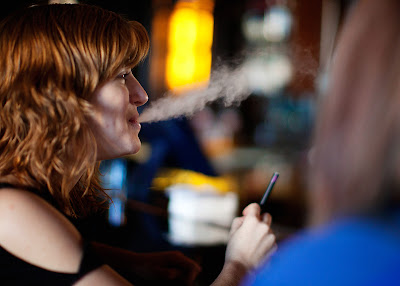 Smoking e-cigarettes as an alternative to tobacco and its addictive component nicotine has been suggested as a viable means to quit smoking while helping the environment. To understand how effective this new alternative is, let’s review the historical context, the disposal, the chemical emissions, energy usage, and second-hand smoke issues.

While the Surgeon General added a health warning on cigarette packages as far back as the Federal Cigarette Labeling and Advertising Act of 1965, the US has not attempted to enact any nationwide federal smoking ban. Bans in the U.S. are enacted only in state and local criminal and occupational safety and health laws.

These measures were responsible for the decline in smoking by more than 50 percent between 1965 and 2009. They eliminated smoke fumes from entering work environments, but reduced their presence outdoors.

The improper disposal of cigarette filters is a major issue. According to a Keep America Beautiful (KAB) study conducted in 2009, cigarette butts comprise 38 percent of all litter on highways, streets, parks, and playgrounds.

Of this number, 53 percent of this type of litter was added to the environment by motorists and 81 percent of people who littered committed these acts “with intent.”

While e-cigarettes certainly cut down on this type of refuse, there is still the matter of their proper disposal. Recycling e-waste products shouldn’t be a problem, however, since recyclers that specialize in universal waste like televisions and computers have become prevalent in today’s society.

People who smoke e-cigarettes are euphemistically called “vapers” because they inhale and exhale e-juice that may or may not contain nicotine, but often is accented with other flavors such as “cotton candy.”

“Vapers argue that the emissions from a few ingredients must be cleaner than the thousands of charred chemicals flowing from the average cigarette,” noted Amber Dance in an LA Times editorial. While the FDA found small levels of several toxins in the cartridge in 2009, “no studies have shown that large amounts of dangerous chemicals are released into the air,” says Dr. Michael Siegel, a professor at the Boston University School of Public Health.

E-Cigarette batteries are rechargeable lithium-ion powered devices that provide the energy for the e-cigarette experience. Computers, laptops, and cell phones use the same type of batteries. Hybrid automobiles also use this battery, which reduces our dependence on oil.

The life of these batteries cuts refuse build-up as well, because lithium-ion batteries can be recharged many times before they completely wear out. One can generally expect to obtain at least 200-250 charges off each battery. Some batteries last for nearly 400 charges.

E-cigarettes are a safe alternative for smokers to end both the physical and mental habit of smoking, without the detrimental effects of tar and other chemicals found in traditional cigarettes.

Four well-known physicians, from the popular TV show “The Doctors” also studied electronic cigarettes. They were touted as one of the top 10 key health trends. Dr. Travis Stork noted e-cigs don’t give the smoker or the people around him the “4000 chemicals (found in traditional cigarettes) that can cause cancer, among other problems.”

In the market today, iGO4 is one of the e-cigarette options that combines advanced technology, form, and functionality to aid with many of these environmental factors.

This product features easy-fill clearomizers that last months, a very high-quality e-liquid, a touch charging station for easy and fast charging, and smart batteries that tell users how much battery life is left and how many puffs have been taken.

As many users and even non-users have noted, vaping is not smoking. The electronic cigarette trend seems to be the number-one choice for smokers looking to lead a healthier lifestyle, while reducing many of the environmental hazards that came with smoking tobacco.